The Cheapskates were hi-tech motorized skateboards built by Donatello, particularly to get to places a lot quicker that the Turtle Van and was primarily used as sewer transport mainly during the second and third seasons.

Child Leonardo and Michaelangelo riding Cheapskate in Back to the Egg 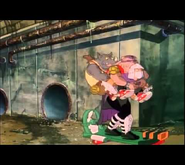 Shredder, Bebop and Rocksteady using Cheapskate to escape in Pizza by the Shred

Retrieved from "https://turtlepedia.fandom.com/wiki/Cheapskate_(1987_TV_series)?oldid=533198"
Community content is available under CC-BY-SA unless otherwise noted.