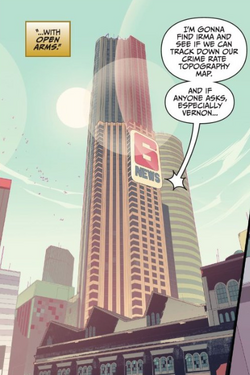 Channel 6 is a television studio in New York City and the place of employment of the Ninja Turtles' human friend, April O'Neil.

April reports on Tommy Oliver's break-in at Mason Technologies at the beginning of MMPR/TMNT #2, and later, she lets Kimberly Hart use her work station to track down Tommy and the Foot Clan.

Retrieved from "https://turtlepedia.fandom.com/wiki/Channel_6_(MMPR/TMNT)?oldid=521399"
Community content is available under CC-BY-SA unless otherwise noted.