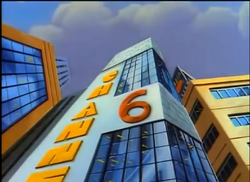 In the 1987 TV series, Channel 6 is expanded to be the everyday workplace of April O'Neil. In this continuity, they seem to be the only city television news agency in New York; other competing channels are almost never mentioned. Only when April is working as a freelance reporter are other networks shown (such as when she sells a story to a network in "The Power of Three").

Besides April O'Neil, the known staff of Channel 6 are Burne Thompson, the boss of the station, Vernon Fenwick, the cameraman and reporter who rivals with April and tries to steal her stories, and Irma, the secretary who's best friends with April.

The newsvans, with the red classical 6 on it, were white during season 1. However, during later seasons, their color had changed to blue.

Channel 6's main role in the series is the treatment of more or less sensational messages that capture the interest of the citizens. Since then, the Turtles for the first time appear in public, and hear through Channel 6 - mainly through April - the exclusive reports about their adventures, even if the studio building and its employees are often themselves affected in the course of these experiences.

The stubborn editor of Channel 6, Burne Thompson has always tried to present the Turtles to the public as criminals. He got the chance in the episode "Get Shredder!"[1], Shredder placed an explosive device in Channel 6's basement and trapped April O'Neil, Irma, Vernon, and Burne in one of the offices. He then forced the Turtles to trade for Krang, whom he believed they had captured (although in reality, Krang was seized by Drakus; a former ally of Krang's, and the co-developer of the Technodrome who Krang sold out years ago). Although the Turtles were successful in rescuing Krang from Drakus, the Shredder still blew up the building because they had exceeded the fixed time limit by one minute. Fortunately, Splinter was able to free the hostages before the building exploded. The ungrateful Burne Thompson blamed the Turtles for the destruction of the Channel 6 building, and took the destruction of his studio as evidence that the Turtles really posed a public threat. As a result the Turtles became wanted outlaws for a time, although Burne's success at having them vilified was limited. After these events, the Channel 6 crew moved to a smaller building and Channel 6 no longer played an important role in the series continuity. In season nine, April had become a freelance reporter and the crew of Channel 6 was never seen again for the remainder of the series.

It should be noted that in the season 10 episode "The Beginning of the End", April is seen briefly watching Channel 6 news.

Other various employees, with their names never mentioned, are also seen throughout the series.

The old Channel 6 building also made a cameo appearance in the crossover movie Turtles Forever as the 2003 Turtles take a detour in the dimension of their 1987 counterparts.