Inside the house, Raph tells the drunken father to put his son down. The belligerent dad isn't too impressed by a giant talking turtle and decides to beat up Raph instead. Despite the father's own street-fighting experience, Raph handily throws the drunk out of his own home. Furious, the father piles into his car and drives off. Raph asks the teenage boy how he's doing, and he rather nonchalantly shrugs the damage off. He is, however, curious as to where Raph came from.

Fifteen months ago, April is spending a late night alone at the Stockgen Research Lab when suddenly the little rat, Splinter, surprises her with an envelope. Taking the envelope from Splinter's mouth, April finds that it contains a disk labeled 'terrapin/human exo-armor synthesis'. Splinter hears a sound and skitters over to the front door where he spies a pair of ninja breaking into the building. The lead ninja tells his partner to eliminate April while he retrieves 'the specimens' for their master. April thinks it's a joke at first, until the ninja tries to cut her in half (destroying the disk in the process). The other ninja begins stuffing a sack with test tubes of chemicals and the four baby turtles. Splinter finds a fire alarm and manages to trip it. The momentary distraction lets April smash a beaker over the face of one of the ninja and run to the approaching police.

Having what they came for, the ninja escape via the rooftops. Splinter gives chase and manages to attack the one with the bag of specimens, tearing at his eye. The ninja drops the bag off the roof and hurls Splinter down after it. The test tubes shatter on impact, covering the baby turtles and Splinter in a glowing green ooze. Splinter awakens to find a stray cat with one of the turtles in his mouth, trying to walk off with it.

Back in the present day, Splinter, Leonardo, Donatello and Michelangelo are down in their sewer lair. Leo wonders if they'll ever be able to find their long-lost brother, Raphael. Splinter is sure that they will, while Don thinks the odds are against them and Mike says he'd rather fight badguys like Old Hob than spend every night looking through alleys. Splinter tells them to maintain hope, as they will need to bring their family back together if they want to survive the trials and tribulations ahead.

At the house, the teenager introduces himself as Casey Jones. Raph asks why he isn't put off by his strange appearance, but Casey says that after growing up in such a tough family, it doesn't seem like a big deal. Raph's hungry, though, and with no food in the house, Casey suggests they go out to eat. Donning a hockey mask and equipping himself with two baseball bats Casey suggests they might have some fun along the way.

Regular Cover A by Dan Duncan.

Regular Cover B by Walt Simonson.

3rd Printing Cover by Kevin Eastman.
Add a photo to this gallery 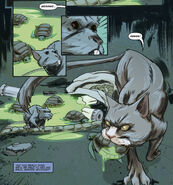 Retrieved from "https://turtlepedia.fandom.com/wiki/Change_is_Constant,_part_2?oldid=432451"
Community content is available under CC-BY-SA unless otherwise noted.