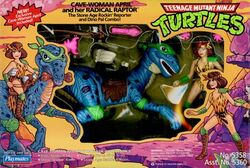 
Being a reporter during the Mesozoic Era isn't the easiest thing in the world, but Cave-Woman April accepts the challenge and chisels her reports in stone for the rock tabloid, "The Prehistoric Times." She loves warnin' everyone about the thunderin' terror known as Cave-Beast Bebop. And when Cave-Woman April's not hammerin' headlines, she's hangin' out with the Cave-Turtles, chowin' down on sedimentary sauced pizzas.

Retrieved from "https://turtlepedia.fandom.com/wiki/Cave-Woman_April_and_her_Radical_Raptor_(1994_action_figure)?oldid=397348"
Community content is available under CC-BY-SA unless otherwise noted.