TMNTPedia
Register
Don't have an account?
Sign In
Advertisement
in: Female characters, Humans, Rise of the TMNT characters,
and 9 more
English

Cassandra "Casey" Jones was a member of the Foot Clan who was referred to only by the title of Foot Recruit. She was a recurring adversary of the Mad Dogs.

Cassandra Jones is a teenage Asian girl with black hair styled in a buzz cut, black eyes, light skin, and a lean figure. She wears a black sleeveless jumpsuit with red wraps around her neck, calves, arms, and a red sash around her waist. She often wears a red face mask during Foot Clan missions. She also wears matte black lipstick, red eyeliner, and two red piercings on her left ear.

Casey is intensely energetic, shown in her frantic speech pattern and tendency to shout. She is a quick-thinker and tends to take herself seriously (though she has the regular playful moment). She is fiercely loyal to the Foot Clan and always wants to prove her worth to them in any way she can, though she seems to most enthused about proving her battle prowess. However, despite her persistently combative nature, she never engages in a fight without the approval of either the Foot Lieutenant or the Foot Brute, and is a devout follower of the Foot's laws and traditions.

Casey seems to feel her emotions greatly as after she learns that she failed her test in "Hot Soup: The Game", she vehemently vows to improve herself to retake it in her disappointment. She has displayed a short temper as when a train car's gravity is deactivated in "Insane in the Mama Train", she quickly becomes angry. In "Many Unhappy Returns", she cries out in dismay when she discovers that she missed the reawakening the Shredder by the Foot, not even trying to temper her alarm.

Despite this, Casey can be influenced relatively easily by those she regards as superior to her in some manner such as when she listens to Baron Draxum throughout "How to Make Enemies and Bend People to Your Will" or Splinter, who is Battle Nexus legend and actor Lou Jitsu, who is able to pacify her and even give her a heart-to-heart in "Always Be Brownies".

Casey is quite ambitious as following the Shredder's return, she longs to take over the world and prove her loyalty to the Foot, despite them abandoning her. However, after meeting Splinter, she began to question her destiny and place in the Foot. She remains conscious of how others perceive and treat her as Casey regularly feels underutilized in her work and taken for granted by her allies who don't seem to share the same faith she has in herself despite her admiration for them.

Casey debuted in "Hot Soup: The Game". She was ordered by the Foot Lieutenant to retrieve a Lou Jitsu artifact as her final test to become a fully recognized Foot soldier. After infiltrating the Montes Auction House after its business hours, Casey encountered Michelangelo and discovered that he was also there to acquire Lou Jitsu merchandise, namely Hot Soup: The Game. In turn, she attempted to kill Mikey and steal the game, but then learned that the game was not what Foot Lieutenant was after, causing her mission to end in failure.

Casey reappeared in "Operation: Normal" while on a mission with the Foot Brute to steal parts of the Kuroi Yōroi from Sunita which she unknowingly wore as her boots. Her and Foot Brute's efforts to steal from Sunita throughout New York were continuously intervened by Donatello and Leonardo, but they were able to finally obtain them after their final confrontation with the Mad Dogs at the Lazerdome.

Casey worked alongside Draxum in "How to Make Enemies and People Bend to Your Will" as he attempted to rise through the ranks of the Foot and carried out errands together as low ranking members. She traveled with the Foot to a New York botanical garden where she and Draxum were surprised to find the Turtles. Casey, taking Draxum's disdain for waiting to heart, immediately attacked the Turtles and pursued them when they left the building to combat the Foot on the botanical garden's outdoor grounds. However, Casey was prevented from joining the battle by Draxum and he gave her the honor of retrieving a piece of the Kuroi Yōroi. Their partnership came to an end when upon his taking over the Foot, Draxum referred to Casey as his assistant.

Casey was tasked with supervising the other Foot recruits as they loaded the disassembled Kuroi Yōroi onto Big Mama's train in "Insane in the Mama Train". Later, whilst in the train's gym car with Foot Lieutenant, she fought Mikey and Donnie as they attempted to prevent Draxum and the Foot from transporting the armor to Shredder's shrine. Casey was teleported by Mikey into the train car that held one of the Guardsmen as he fought Raphael and was left to face Raph on her own after the Guardsman was teleported to a different car. She managed to sabotage Raph's attempt to enter the Kuroi Yōroi's car, but was later abducted and restrained by Raph alongside Foot Lieutenant where the two of them were soon after thrown off Big Mama's train by fellow passenger.

After Splinter and the Mad Dogs' battle against Draxum in "End Game" moved from the Shredder's shrine to a New York baseball stadium, Casey teleported onto the field in "Many Unhappy Returns" with the intention of aiding Foot Lieutenant and Foot Brute in reviving the Shredder, but realized that his resurrection had already transpired during her absence. To her shock, Casey was then attacked by Shredder along with Foot Lieutenant and Foot Brute. After Shredder suddenly vanished from the field, she teleported alongside her superiors to the Foot Shack.

Casey summoned Julia to her Grandma CJ HQ in "Always Be Brownies" to receive an explanation concerning Julia's girl scout troupe's sudden low brownie sales. She then ordered her to bring April O'Neil and Splinter to her headquarters to be inducted into her business. Once the two were successfully kidnapped, Casey interrogated Splinter, wanting to know what plans he devised to impede her world takeover. However, after Casey realized her goal was going to take longer than she anticipated, she became thoroughly discouraged. Splinter then drew a parallel between her and April, stating that April also struggles to achieve her goals, but that she shouldn't give up like April wouldn't. Casey was reinvigorated by his words, wanting more than ever to attain global dominance and was challenged by April herself after she emerged from an air duct. She eventually released Splinter in exchange for the money April and him made from their cookie sales earlier that day and left. Later, Casey was abducted from her bedroom by a mystic orb while trying to learn Lou Jitsu's J.I.T.S.U. method.

Casey was transported inside the mystic orb used by Big Mama for her Battle Nexus Wizbang in "Battle Nexus: New York" to capture the New York City population to use the city as an arena. The calming magic that Casey was under while in the orb was broken after Draxum, who had also been imprisoned in the orb, informed her, Splinter, and April of the situation they were in. She quickly tried to escape and managed to due to Draxum exploiting a fracture in the orb's surface with his mystic vines. Outside of the orb, the Turtles were locked in a confrontation with Big Mama and her Battle Nexus champion Shadow Fiend to obtain the orb and Casey, Draxum, April, and Splinter joined the fight. During the fight, Casey struck Shadow Fiend with April's mystic baseball bat and it was then she realized that Shadow Fiend was actually the Shredder in disguise. She deduced that Big Mama was using the mystic ring she wore to control him and met everyone at the top floor of the Grand Nexus Hotel once the battle moved there. After the Shredder had been forced out of the hotel by Splinter and the Mad Dogs via an attack, Casey donned Big Mama's ring before anyone could intervene and commanded the Shredder, who had returned to the hotel, to kill everyone else in the room. Draxum and the Mad Dogs escaped through Leo's mystic portal and Splinter offered Big Mama to do the same, but the Shredder prevented her from entering it. Furious with Big Mama's treatment of the Shredder, Casey then ordered him to destroy her hotel and traveled back to the Foot Shack with him once it collapsed.

Casey reunited Foot Lieutenant and Foot Brute with the Shredder in "Finale Part 1: E-Turtle Sunshine of the Spotless Mind" and with his autonomy suppressed because of the mystic collar he wore, Casey decided to remove it. However, her attempts were futile and the Shredder freed himself of the collar once he regained his full power with the removal of Hamato Karai from the Twilight Realm.

Casey joined the Shredder, along with Foot Lieutenant and Foot Brute, in his quest to kill Karai who was located at Splinter and the Turtles' lair in "Finale Part 2: Shreddy or Not". Casey engaged in a fight with Splinter who expressed his desire for her to leave the Foot to which Casey adamantly refused, but she was ultimately restrained by Draxum.

In "Finale Part 3: Anatawa Hitorijanai", Casey traveled with the Shredder and her fellow Foot Clan to Draxum's laboratory to obtain the Empyrean he claimed to own. However, Draxum revealed that he was lying and created a golem to attack the Shredder and the Foot who the Shredder easily overcame. When the fragments of the laboratory's crumbled ceiling were falling due to the Shredder's attack, Casey was saved from being crushed beneath it by Splinter.

Casey attempted to prompt the Shredder to help Foot Lieutenant and Foot Brute in "Finale Part 4: Rise" after they were buried beneath the rubble of Draxum's laboratory, but to no avail. Instead the Shredder promoted Casey to Foot Clan general in their stead and ordered her to leave them be, an order she obeyed, but not without considerable hesitation, Once her and the Shredder arrived at the Crying Titan, he instructed her to create the ritual to extract Splinter's Hamato energy. Casey struggled with her devotion to the Shredder and her reluctance to kill Splinter, but eventually finished drawing the ritual. When the Mad Dogs appeared to confront the Shredder, Casey guarded Splinter from them, but when the Shredder returned from the battle to finally consume Splinter's energy, Casey stopped him, realizing she couldn't bear to see Splinter dead despite her very little history with him. She revealed her identity as Cassandra "Casey" Jones and freed Splinter's essence from one of his binds. She was saved from enduring the Shredder's wrath by Splinter striking him before he had to chance to attack her. Casey then helped Draxum, Splinter, and the Mad Dogs destroy the Kuroi Yōroi in a final fight and afterwards returned to New York with them.

Shadow Jones from the Mirage continuity. 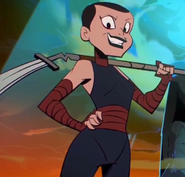