Casey Jones VS. The Underworld

"Casey Jones VS. The Underworld" is the fourteenth episode of the third season of the 2012 TV series, and is the sixty-sixth episode overall in the series. It first aired on March 22nd, 2015.

After a battle with the newest leader of the Purple Dragons, Casey Jones thinks he can take on the Shredder and the criminal underworld on his own. However, he soon finds himself in over his head. Elsewhere, the Turtles start to settle down back in the sewers after the Kraang invasion.

In a voice-over, Casey explains that New York City is slowly returning to normal after the Kraang Invasion. Although while the Turtles battled the Kraangs in Dimension X, Casey is frustrated about being sidelined during the "Battle for New York". He notes that while most of the city has pulled together after the invasion, there are others that still terrorize the city, namely, the Purple Dragons.

At that very moment, the Purple Dragons are seen robbing a bank. Casey drops in to stop them, only to encounter their new leader, Hun. After a struggling battle, Hun easily defeats Casey and makes his escape with the other Purple Dragons as the police arrive, leaving Casey in great pain.

Meanwhile, the Turtles and Splinter move back into their own lair, which was wrecked during the Kraang invasion. They start getting to work cleaning the place up. Leo slowly cleans the living room. Donnie finds his lab a complete mess. Splinter restores his family picture, wondering where his daughter is now. Michelangelo cleans up the kitchen. He sees that the food in the fridge has spoiled. He then sees a slice of old pizza that was roach-covered and moldy. He ate it, knowing that he'll reacquaint himself later for getting sick. As Raphael clears out some of the Kraang-droids, Casey walks into the lair looking very mad and defeated.

As Raphael asks Casey where has he been, Casey replies by yelling at Raphael for not fighting against crime that has begun to increase lately. Leonardo then explains that they just got back into their home with Donnie backing him up saying, "We just stopped a little thing called a massive alien invasion." Michelangelo tells Casey that its good to have a little down time while stuffing his face with cheese balls. Casey finally confesses that he fought the Purple Dragons. Everyone sarcastically "oohhs" and Raphael asks how Casey fared. Casey tries to hide the fact that he was beaten by saying they didn't get the money. Donnie asks more plainly if he beat them which Casey doesn't answer and to his embarrassment, everyone laughs. Casey in anger is even more prideful about protecting the city alone. Donnie jokingly gives Casey good luck.

Once Casey leaves he tries to find the Purple Dragons especially their new leader. His eye is quickly caught once he spots Shredder along with Tiger Claw and Foot Soldiers riding bikes to a secretive restaurant. There they are met by Fish Face. Casey sneaks in the back and disguises himself as a waiter. Shredder has a conversation with Don Italian Mob boss Don Visiozo explaining the invasion and how the power has now shifted to the Foot Clan. As the Don pulls a knife out everyone except Shredder draws a weapon. Shredder commands Tiger Claw to and Fish Face to stand down with Shredder now telling of the clans and mobs now in his power. Shredder states that he controls the Russian Mob through Rocksteady, the Purple Dragons and other Asian gangs through Hun, and the South American gangs through Fishface. The Don agrees to Shredders term after he slices his meatball on the fork and the candles. Shredder quickly makes demands for chemicals and while the Don tells him of the shipments coming in. Casey is soon pinned to the table by Shredder believing him to be a spy. However, Casey explains that he's just a busboy and Shredder lets him free warning him to not reveal his face in his presence ever again.

Casey hyper about his encounter with Shredder texts Raphael about the situation. The scene is then reverted back to the turtle's lair where they continue to clean with Raphael throwing Kraang droid heads in a pile and Leo can be seen scrubbing the floor. They both cease from working exclaiming a break is best and Leo admitting that cleaning is harder than training. Michelangelo panics over the remote enough to annoy Donnie he hits him in the head with a broom stick. Mikey soon begins speaking of how good the remote is but finds it on the table, then turns the TV on to watch Conard the Barbarian. Raphael leaves to see what Casey is talking about.

At the docks, Rahzar is seen throwing a man out of a car and Fishface searches the back for the chemicals. As they complain who is the boss of who Casey, hiding, attacks Fishface. Rahzar and Casey have a brief fight with Casey gaining the upper hand, but Fishface kicks him into a pile of boxes causing Casey to struggle. Rahzar approaches Casey but a box lands on Rahzar and Fishface confused is kicked by Raphael. Casey demands help with the suitcase of chemicals and Raphael helps. Raph wants to know why Casey went after Fishface and Rahzar on his own and why was the attack worth risking his life over. Casey yells back at Raph hinting to open the case. They discover the dangerous chemicals and plan to return them to Donnie. Casey disagrees and goes after Shredder after Raph tells him he doesn't stand a tiny chance against him. At Stockman's lab Shredder checks on the mutant snake Karai as she is held in a sort of small habitat. After banging on the glass Shredder commands Stockman to arrive at a solution to turn Karai back to normal soon. Tiger Claw then arrives informing Shredder about the Purple Dragon's arrival.

Hun bows and shows Shredder that they've found more chemicals. Dr. Stockman explains that he does not have the necessary equipment for the chemicals, but Shredder in anger demands that he finds the equipment. Hun offers Shredder more chemicals as there is a chemical factory in China Town. Shredder agrees and Casey listening to the whole conversation plans to follow them. As Leo and Raph argue over letting Casey go off on his own, Donnie is analyzing the chemical. Donnie then says that he doesn't have an idea about the chemicals bringing up that he is aware that Stockman doesn't have the equipment to synthesize the chemical. Mikey again with a mouthful of cheese balls causes Leo to ask him if he knows what the food is produced from. Mikey reads off the ingredients, but when Donnie reads it he finds out that it's slightly radioactive and that it came from the Auman Chemicals manufacturing factory. The turtles from there easily pinpoint the location of the Shredder's meeting with Hun.

At the factory Hun asks to overlook the factory and Shredder agrees without thought while scolding Tiger Claw for his countless failures. Casey smacks some puck bombs their way and prepares to face Shredder. Shredder easily subdues Casey and finds out that he is the boy from the restaurant. Shredder gets ready to end Casey, but Casey shocks Shredder. Angered, he kicks Casey across the floor and backing him into a corner, about to attack. Suddenly Leo and Raph kick Shredder to keep his distance from Casey. Donnie and Mikey land behind Shredder with Mikey yelling, "Aw yeah!" A fight quickly ensues and Rahzar activates the factory's controls. Donnie fights Fish Face, Raph battles Tiger Claw, Mikey goes head to head with Rahzar and Leo faces the Shredder claiming to end him here and now. Casey then has a rematch with Hun. Donnie discovers the substance that was in the cheese balls and decides to mix it with the other chemicals in the factory to stop Shredder's plans. Donnie soon dodges Fish Face to drop the substance, but is quickly knocked out of distance by Fish Face. As the two struggle to get the substance it lands behind Hun. Casey now more focused charges into Hun and throws him over. Casey finally dodges the rest of the enemies and plays hockey with the substance and scores it into the mixture causing the place to be covered with chemicals. Shredder frustrated says that this has only delayed his plans.

Back at the lair Raph, Leo, and Mikey congratulate Casey on his success while Casey replies with still working alone mostly, Raph disagrees with his claim. Donnie studies the chemical more and learns that Shredder's mixture is a mind controlling chemical. He then goes on to state that the chemical can be used to control Karai, them, or possibly all of New York City. Everyone is completely shocked as Donnie holds the chemical. 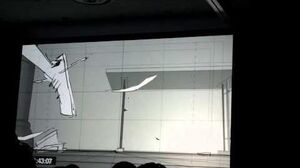