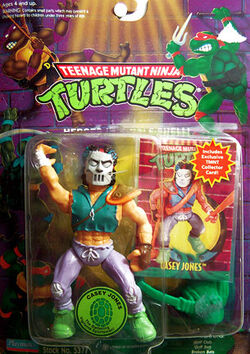 Like all psychos, Casey Jones, the masked sportsman, wanted to be a legend. Armed with broken bats, shattered dreams and one golf club, Casey turned his ambition toward crime-fighting. Modeling himself after his favorite vigilante cop show, Casey decided to take the law into his own mitts. Outfitted with castoff sports gear, Casey challenges every criminal who dares to go out of bounds. This bat-bearing vigilante fights to rid the world of all bad sports, including those who would dare steal second base. Casey's got a score to settle against all lawless losers - from litterbugs to madmen bent on world domination. Teaming up with our beloved Turtle Teens, Casey strikes out with a special vengeance against Shredder and the Foot Clan!