In the IDW continuity, candy is occasionally exchanged between Michelangelo and Slash as an affectionate gesture. When Mikey and Slash first meet in City Fall, part 3, Mikey offers the simple-minded Slash a candy bar to bond with him. Later in the Christmas Special, a far more sapient Slash brings a festively-bundled bouquet of candy bars to Mikey's Christmas party. 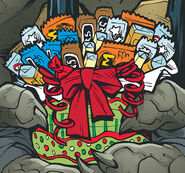 Add a photo to this gallery
Retrieved from "https://turtlepedia.fandom.com/wiki/Candy_(confections)?oldid=419065"
Community content is available under CC-BY-SA unless otherwise noted.