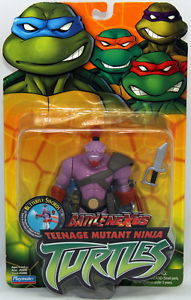 Butterfly Swords – he floats like a butterfly and stings like a bee! Sure, he may be on the quiet side, but don’t let his silence fool you – Butterfly Swords (or Zat, his birth name) is one rough ‘n tough character and the only one-handed contestant to ever make it to the Final Eight level of the Battle Nexus fighting competition! Overcoming his missing left hand, Zat has developed a unique “butterfly” motion fighting style that has become feared and respected throughout the multiverse! He slices! He dices! He’s Butterfly Swords and he’s winging his way to victory! 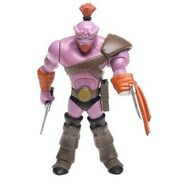 Add a photo to this gallery
Retrieved from "https://turtlepedia.fandom.com/wiki/Butterfly_Swords_(2005_action_figure)?oldid=442127"
Community content is available under CC-BY-SA unless otherwise noted.