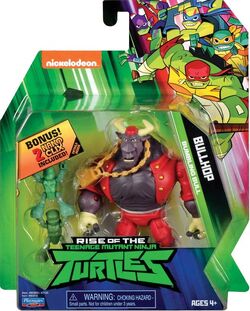 As a human, Bullhop took his job as bellboy at Big Mama's hotel very seriously. In fact, he was doing his best to keep the lobby spick and span when he was accidentally mutated into a hulking and clumsy bull.

He became the Turtles' friend and tries to help out on missions, but he tends to do more harm than good. 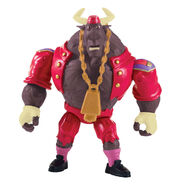 Add a photo to this gallery
Retrieved from "https://turtlepedia.fandom.com/wiki/Bullhop_(2019_action_figure)?oldid=514019"
Community content is available under CC-BY-SA unless otherwise noted.