In the Teenage Mutant Ninja Turtles & Other Strangeness role playing scenario Terror on Rural Route 5 by Palladium Books, Buck is a mutant hound dog who has been psychically coerced by Ferd into the role of domestic terrorist.

Buck's character art illustrates him as a bipedal mutant dog with sunglasses, a puffy mohawk and carrying an assault weapon. But he's also described as someone who can prowl the countryside and easily lie down and pretend to sleep in such a way that he can pass for an ordinary dog to any human observer he may actually be spying on, which would imply the ability to assume a more ordinary appearance.

Buck is described as someone who is warm, humorous, good-natured, and speaks and moves slowly and deliberately. Though he is capable of violence, he is not a natural villain, and would oppose hostage-taking tactics if not for Ferd's psychic manipulation.

As a dog, Buck has a strong sense of smell. He is also fairly proficient with certain firearms and assault weapons.

Unlike his fellow farm mutants Ferd and the pigs, Buck has seen a little more of the world than just what's on television, having prowled around the nearby countryside outside the farm. Buck stole a cache of weapons from a nearby national guard base to arm Ferd's struggle, but hasn't shared some of Ferd's preferred tactics, like hostage-taking. Nevertheless, Buck has been cooperating with Ferd's terrorism because Ferd has psychically coerced Buck into doing so. 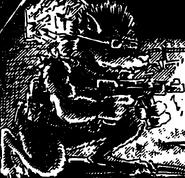 Buck with Ferd and some of the Mutant Pigs.
Add a photo to this gallery
Retrieved from "https://turtlepedia.fandom.com/wiki/Buck_(Palladium)?oldid=421365"
Community content is available under CC-BY-SA unless otherwise noted.