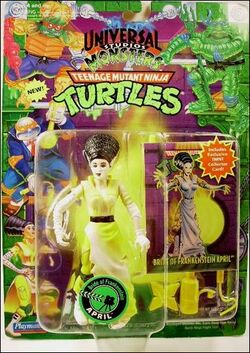 She's alive -- and she's goin' to the chapel! It's Bride of Frankenstein April, the monstrous mate with the tail hair. She's shocked full of life and ready to go down the aisle. Nothing will stop her! Not even the Foot, who are notorious for crashin' weddings! A squirt of scare away hair spray keeps her hairdo intact and chokes a few Foot fools along the way! She can clear a path with her nasty Ninja fright star: one stick and it's stuck for good! Then if her dear Dr. Frankenstein doesn't get cold feet (he may not, but she will since she's Undead), she'll fire up the creepy cracked camera, throw the electrode power switch and bring her wedding to life! Hopefully, it will be rainin' outside and there will be plenty of lightning to keep all that goin'! Of course, Bride of Frankenstein April's Turtle Teens will no doubt be there, too. Hoping to be in the front row, the universally monstrous Creature from the Black Lagoon Leonardo promises to preside over the ceremony, but April wasn't sure if he had the brains to do it! And April may never know if Invisible Man Michelangelo shows up. If candles mysteriously float away, that's a good sign he's there! Sounds like a scary day. Let's hope Michelangelo doesn't catch the bouquet!

Retrieved from "https://turtlepedia.fandom.com/wiki/Bride_of_Frankenstein_April_(1994_action_figure)?oldid=389098"
Community content is available under CC-BY-SA unless otherwise noted.