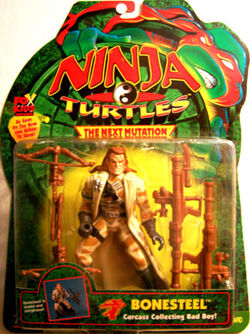 The Turtles have Bonesteel on the run. He has just stolen two very valuable endangered animals from the city zoo. Just before the Turtles can pounce, Bonesteel pulls out his Turtle Targetin’ Bazookas and lets a load go! KaBoom! The Turtles are gone, but Bonesteel is not so easily fooled. He arms himself with his Shell Crunchin’ Crossbow and walks slowly to the end of the alley. Suddenly Bonesteel hears a sneeze. He turns around and fires, sending a poisoned arrow into the darkness – but there is no one there. Bonesteel begins to panic and swings his Double Handle Turtle Axe wildly about, but its razor sharp edge finds no flesh. Then, as if on cue, all five Turtles magically appear in the alleyway. Bonesteel is surrounded, he whips out the bag containing the two rare creatures and tosses it high into the air. The Turtles lunge forward and snag the bag before it hits the ground. The Turtles have saved the animals, but Bonesteel is gone. His maniacal laughter is heard echoing through the darkness as Donatello sneezes again.
Retrieved from "https://turtlepedia.fandom.com/wiki/Bonesteel_(1997_action_figure)?oldid=492659"
Community content is available under CC-BY-SA unless otherwise noted.