To be fair, I've never seen Once Upon A Time.

But some pretty terrible things can happen to TMNT characters in adult comics. Mirage Splinter ended up really having to eat other rats to survive until he could escape his confinement. And then there's all the psychological damage inflicted on some of the characters in MNT Gaiden. Or IDW TMNT for that matter. 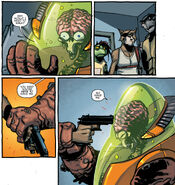 Most stories are certainly not that grimdark all the time, but considering what inherently dangerous lives characters like those live, they're bound to have a few traumatic experiences now and then. As Yoshimickster said, balance is important.

Actually, come to think of it, the only TMNT story I can think of that doesn't even pretend to balance out the bad stuff that happens, is Bodycount. I still haven't been able to finish reading that. It's just far, far too graphic. Kevin Eastman might be able to write some good action sequences, but he needs to be counterbalanced by another creator, or else the result can be stuff like Bodycount.