Not to be confused with Blind Sight.

Blind Faith is issue #5 of Tales of the TMNT volume 2, published on September 2004 by Mirage Studios. Its story is continued in the miniseries Tales of Leonardo: Blind Sight.

Spoiler warning: Plot or ending details follow.
Leonardo is in battle with a mysterious ninja. The last thing he sees is a cloud of tetsubishi being thrown his way. Their drug-tipped caltrops poke his skin and he collapses in a daze. He realizes he had to quickly regain his composure or he would be at his opponent's mercy. The anticipated next attack does not came, but Leo can still hear the ninja's presence through the subtle faint noises he makes, and Leo even thinks he can hear the blood pumping through the ninja's body. But as no attack comes, Leo realizes the ninja is waiting for him, and has no choice but to stand up. Leo knows he has been poisoned, but he doesn't collapse or die, but he realizes he has completely lost his ability to see—he is blind.

This is not exactly new to Leo—he has fought in complete darkness and low visibility before. So, realizing he cannot rely on his eyes, he focuses on his opponent with the rest of his senses. The ninja throws a kusarigama chain, and Leo can hear it, even realizing that it is quieter than it should be, having been somehow noise-dampened. But it is not quiet enough, as Leo can hear the displacement of air as the chain rushes towards him, allowing him to dodge and roll away. Leo takes command of his remaining senses to locate his opponent, and soon proves formidable even with this handicap.

Leo soons realizes there are two people before him, but one is no ninja—Leo smells alcohol, tobacco smoke, wet clothes and body odor, and realizes the other person is a homeless man who has become ensnared in their battle. The ninja opponent quickly climbs a nearby building to its rooftop, and Leo follows doing the same, which he can do even while blind.

On the rooftop, the ninja asks Leo if he remembers him. Leo says yes, but is lying. The ninja asks if Leo remembers what he did to him. Leo guesses he defeated the ninja before. But the ninja calls his past defeat a gift, giving him a sight beyond seeing. Then Leo has an epiphany—his opponent is blind too! Leo reasons he must have been a Foot Ninja he blinded in an earlier battle who is now seeking revenge. The blind opponent explains that the Foot Clan would no longer let him fight, and put him to work polishing weapons—a waste of his new talents. The ninja had continued to train and became a master of blind fighting. He likes it this way now, observing that being able to see is a distraction to the keenness of the other senses. Leo interrupts him and demands they continue fighting. But his opponent continues speaking, saying he has found the ability to become everything through achieving nothingness.

Then Leo abruptly realizes he can no longer sense his opponent's presence at all through any of his senses, and the sensation makes him feel very weak. Leo tries to do the same—to let go and become nothing. The opponent quickly strikes, but Leo manages to block him, and their fight continues for a while. 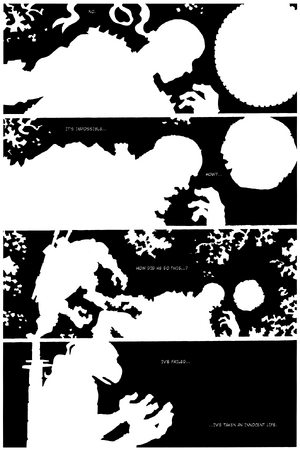 But Leo's opponent manages to kick him, knocking the turtle into a brick wall that partially shatters on impact with his head. The blow has left Leo feeling disoriented and unfocused as he scrambles to pick up his swords. Leo decides to lure his opponent in by taunting his blindness. Leo uses the opportunity to impale his opoonent on his katana. Leo observes that his opponent doesn't make any sounds other than his blood spilling and his heart weakening.

Now that his opponent is dead, Leo takes some moments to regain the focus of his senses. But he is horrified to realize that the person he just impaled was not the ninja he fought, but the homeless man from earlier—Leonardo has killed an innocent human being. Leo soon realizes that his blind opponent had total control over this entire situation, and could still be nearby, ready to kill the turtle. But Leo realizes that his blind opponent never wanted to kill him—he wanted to blind him, and then to dishonor him. That was the blind ninja's revenge, and it couldn't have been more devastatingly effective.

And Leonardo still can't remember who his opponent originally was when he had blinded him.

Retrieved from "https://turtlepedia.fandom.com/wiki/Blind_Faith?oldid=509359"
Community content is available under CC-BY-SA unless otherwise noted.