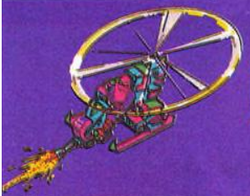 Blackhawks are attack helicopters built for a solitary rider, that are manned by Foot Soldiers in Teenage Mutant Ninja Turtles (arcade game). They appear on the Rock-A-Fella Expressway and attempt to gun down the Turtles with a front-mounted rail gun; they also have bombs hidden in a chamber on the bottom, which they will not hesitate to drop.

Retrieved from "https://turtlepedia.fandom.com/wiki/Blackhawk?oldid=487027"
Community content is available under CC-BY-SA unless otherwise noted.