The Teenage Mutant Ninja Turtles Annual 2012, later reprinted in color with the story formally titled Big Trouble in Little Italy, is a special 60-page annual issue of Teenage Mutant Ninja Turtles, published on October 31, 2012 by IDW Publishing. It is the first issue in the IDW TMNT continuity illustrated entirely by original TMNT co-creator Kevin Eastman, who up until this point was one of the IDW reboot series' lead writers. It is also the first IDW TMNT story whose inner pages were originally published, as per traditional fashion of the older Mirage TMNT era, entirely in black and white with old-fashioned cross-thatch tone-shading rather than in full color.

Raphael and Casey find themselves in the middle of a criminal caper gone awry that touches the lives of many of their friends... and enemies! Double-cross upon double-cross leads the Turtles to the heart of the NYC criminal underworld. Various factions jockey for power, but at the end of the day only one can end up on top. Will it be the Foot Clan? Expect the unexpected in this exciting, all-new Kevin Eastman-written/drawn tale!

Leonardo, Michelangelo and Donatello are racing over rooftops, having just finished their workout. Donatello is disgruntled because Raphael is off with Casey rather than participating in their teamwork, but Leonardo seems more accepting. They head home for the night to the Second Time Around apartment, and greet Splinter.

At the waterfront, Casey Jones and Raphael wrestle and trash-talk as they tumble down the side of a building, landing in an alley. Suddenly they hear a car crash somewhere nearby, and as they rush to investigate, they're nearly hit by a flying briefcase and encounter a homeless man that Casey recognizes. When they get to the crashed car, Raphael smells leaking gas, and declares that they have to get the passengers out before it blows up. At the same time, two small-time crooks named Kanada and Timmy Two-Shoes scuttle away from the crash scene.

They rescue the men inside - including three Savate ninja and a professional underworld arbitrator, Louis Royo - just before the police show up. Unfortunately, a second cop car arrives before Casey and Raphael can flee the scene, driven by the two crooked cops Corbin and Miller.

A brief flashback shows that the Savate were on their way to pay five million dollars in tribute to the Foot Clan when their way was blocked by Kanada and Timmy standing in the street, looking at Casey's "flying" bat. The car spun out of control, and as it crashed, the briefcase full of money was sent flying into the shopping cart of the homeless man, an ex-boxer named Kid Kennedy.

Kanada and Timmy spot the briefcase and decide to steal it from Kennedy. A fight breaks out, and Kennedy is defended by his old friends Fight'n Ferguson and Brooklyn Bridge at the Skara Brae. Once Kanada and Timmy have been disposed of, Ferguson looks inside the briefcase, and is shocked to find diamonds.

Brooklyn spots Casey and Raphael on the street nearby, and orders them inside the Skara Brae. Raphael is dismayed by this development, since he's been spotted for the second time in one evening, and he's sure Splinter will be upset. Once inside the pub, Casey informs the three older men of where the briefcase came from and how they came to be there, Brooklyn predicts that whoever had the briefcase will come looking for it, and kill whoever has it. So he suggests that they quickly fence the diamonds and split the money amongst themselves.

Back at the crash site, it's revealed that Corbin is on the payroll of Savate bodyguard Max Frezatto, while Miller is working with Royo to steal the diamonds. Both cops arrived at the crash site as part of prearranged meetings with the car's passengers. Royo and Frezatto head straight to the Skara Brae in order to use the phone, and are surprised to find it closed. Inside the pub, Brooklyn orders the others to hide the case and act as normal as possible while the two underworld figures are there.

Elsewhere, the Savate leader Fabrice sees the crash on television, and is enraged by the loss of his car. Frezatto calls him from the Skara Brae, and tells him of the loss of the diamonds. Fabrice is convinced that this was all a setup, and so commands the two to go back to the scene of the accident, so he can send a troop of Savate ninja - led by his second-in-command Victor - to find the diamonds or kill who has them.

Back at the Second Time Around shop, the other three brothers are grousing about Raphael's long absence, especially as it is his turn to do the dishes. While Michelangelo is channel-surfing, Splinter spots a news report about the crash, which includes a photograph of Raphael's face. He orders Leonardo to go find Raphael and Casey, and bring them back as quickly and quietly as possible. And as the Turtles head out to find their brother, they spot a line of Savate ninjas running over the rooftops, and decide to follow them.

At a Foot Clan facility, Karai and Shredder are informed about the loss of the diamonds. Shredder order Karai to take the diamonds from the crash site, and declares that one way or another, the Savate will pay.

Royo and Frezatto stumble across Kanada and Timmy scheming to reclaim the briefcase for themselves, and quickly learn from the two thugs that it's at the Skara Brae. The two separate for a moment to call their respective crooked cops, declaring that they now know where the diamonds are. A Savate lieutenant, Fershid Diaz, quickly informs Fabrice of the diamonds' location as well.

As Miller and Corbin converge on the Skara Brae, Kid is preparing to depart with the briefcase. Raphael and Casey decide to follow the older men, out of concern that the Savate ninja will find them. As they leave, they realize that Kid and Ferguson aren't heading back to the crash.

Ferguson has decided to sell the diamonds himself, in hopes of getting Kid the brain surgery he needs and a trip back to Scotland for them both. However, they run right into the Savate. Before the Savate can do anything, Raphael, Casey and the other Turtles all arrive to defend the old men, and the Foot Clan arrives to take the diamonds themselves.

Miller and Corbin burst into the Skara Brae to demand the return of the diamonds, and are interrupted first by Angel and the Purple Dragons, and then by Fabrice and the Savate. A massive fight breaks out, with Fabrice being knocked out by one of the corrupt cops. Brooklyn orders Angel to call in the cops, and a SWAT team is summoned to the Skara Brae.

While the Foot and Savate battle over the diamonds, the Turtles decide that they simply need to get Casey and Raphael and get out. The briefcase is tossed from person to person until Karai and Victor both manage to grab hold of it, only for Michelangelo to swoop in and take it instead. As everyone piles on him, the briefcase is sent flying again and is caught by Casey. He tosses it away, only for it to fly open and scatter the diamonds inside.

Just then, the police arrive, and all three groups of ninjas decide it's time to leave. By the time the police make their way in, they find nothing but a baseball bat. The diamonds have fallen into the water below the docks.

The next day, Corbin and Miller view Fabrice, Royo and Frezatto in their jail cell, and swear off any further dealings with ninjas. Now that Victor is the new leader of the Savate, Shredder declares that the only tribute he will accept from the Savate is their lives. The Skara Brae is being restored to normal. Kanada and Timmy are still down on their luck.

And at Second Time Around, Raphael and Casey are washing dishes as a punishment for having gotten involved in so much trouble. After they've finished, they race each other again, and Raphael tackles Casey down a building, sending his bat flying once again.

Cover RE Jetpack Comics #2 by Kevin Eastman.
Add a photo to this gallery 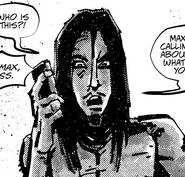 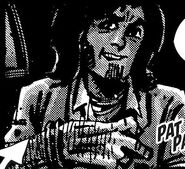 Retrieved from "https://turtlepedia.fandom.com/wiki/Big_Trouble_in_Little_Italy?oldid=428499"
Community content is available under CC-BY-SA unless otherwise noted.