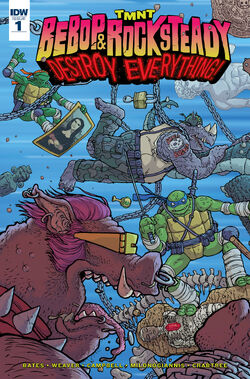 After their defeat in TMNT #50, the dull-witted Bebop and Rocksteady, everyone's favorite warthog and rhino mutants, are feeling dejected and without purpose. However, when they stumble across a time-travel scepter, they realize that their craziest, most destructive adventure awaits! Will the universe survive?

65 million years ago, during the Age of Dinosaurs, the ex-Time Master Savanti Romero, wielding the Scepter of the Sands of Time, battles a version of the Teenage Mutant Ninja Turtles (wearing all red masks) and Renet. The Turtles defeat Savanti and he is banished, forced to remain in the prehistoric age. And while Savanti was once held in exile for eternity, he is suddenly rescued when the timeline is altered by two unlikely time travelers, explains our narrator Donatello.

In the present day, the Turtles are sneaking into the Natural History Museum in New York City to investigate a new exhibit, Mysteries of the Ancient Sorceress, featuring the mummified remains of a human that somehow dates back to the Cretaceous Period. While Raph comments that dinosaur bones aren’t nearly as impressive as living ones (like they saw in the Turtles in Time miniseries) and Mikey cracks jokes, Leo tells Donnie that he could have handled this mission by himself. Donnie tells Leo that it’s not the mummy he’s interested in, but two other specimens found nearby—two fossils that like exactly like their two bumbling foes, Bebop and Rocksteady.

In a separate panel, Donnie breaks the fourth wall, telling us, the audience, that this story revolves around Bebop and Rocksteady and their accidental adventure through time.

Later, Bebop and Rocksteady lament their lot in life, sad after being kicked out of another gang and on their own again. Rocksteady, who is very bad with geography, wonders why they were sent to what he thinks is Africa. Rocksteady tells Bebop that they should just make some fast money and fly back to New York, but Bebop tells him that’s impossible, because they don’t look like the pictures on their old ID cards anymore.

Meanwhile, back at the Natural History Museum, Mikey calls for his brothers to take a look at the gemstone in the grasp of the prehistoric mummy. Mikey tells his brothers that the can hear the gem calling to him, telling him to touch it. He touches a finger to the gem and a beam of energy bursts outwards, opening a portal from which falls a confused Renet, the Turtles’ friend and a Time Lord. Renet wonders how she ended up at the Museum of Natural History when she was traveling to the Neurial Empire in the year 6056 when she turns around and sees the Turtles. Donnie explains that Renet appeared when Mikey touched the mummy’s gem. Renet says it’s a type of automatic teleporter, and a rare one at that. Renet tells the Turtles that the mummy was a time lord who apparently knew the Turtles. Suddenly Renet realizes that the mummy is her in the future.

In an attempt to clarify things, Mikey asks Renet if she thinks that at some point in the future she will travel back in time to the age of dinosaurs and leave a gemstone to be found by the Turtles, which would summon young Renet to them. Renet tells them that if she went back in time to the Cretaceous Period, it’s because of Savanti Romero. Renet tells the Turtles that Savanti must have survived when they defeated him last. The Turtles, totally confused, ask Renet who Savanti Romero is. Renet tries to jog their memory, reminding them about how Savanti had taken her time scepter and attempted to cause all the volcanoes on earth to erupt at once, altering the earth’s orbit ever so slightly, so that the meteor that killed the dinosaurs would never hit happen and earth’s history would be changed forever, erasing the Turtles from existence.

Leo reminds Renet that all they did in the past was encounter some Utroms, not fight a time lord named Savanti Romero. Rent asks if she was there and Leo reminds her, and Renet realizes that the Turtles traveling back in time after being saturated with chronoparticles hasn’t happened yet for her, as she jumps around in time a lot. The Turtles realize that Rent doesn’t remember meeting them at the Battle Nexus either, because that had not yet happened for her either. The Turtles ask how Renet knows them if she hasn’t even met them yet. Renet explains that she’s met them many, many times, but some of them were alternate dimension versions of the Turtles. Renet explains that there are countless alternate dimensions, parallel universes, whatever you want to call them, but Time Lords like herself exist as singularities across all realities. Raph wants to know how Bebop and Rocksteady tie into all the situation. Renet explains that she must have set up the gemstone teleporter to get her to help the Turtles, and that Savanti must have gotten his hands on her time scepter, which means he could be anywhere in time or space, or even in another dimension.

Renet tells the Turtles that they still have an ace in the hole: the time scepter that Savanti has is a future version of Renet’s time scepter, which means that the two are linked and they can use the one to track the other. Renet inputs some information into her time scepter and she discovers that there’s another one on earth now.

Retrieved from "https://turtlepedia.fandom.com/wiki/Bebop_%26_Rocksteady_Destroy_Everything!_issue_1?oldid=490693"
Community content is available under CC-BY-SA unless otherwise noted.