This article is about place. You may be looking for the game.

The Battle Nexus is a "nexus" of dimensions connecting many different worlds, including multiple incarnations of Earth (ex: called dimension "Third Earth" by the Gyoji) and the Triceraton homeworld. It was the home of the Battle Nexus Tournament also known as the "The Big Brawl", a competition held every three years where the mightiest warriors from numerous galaxies come together and battle to become the champion of the multiverse.

The Battle Nexus was started by Lord Simultaneous and the other Time Lords.

This world climatically and geologically resembles the image of medieval Japan. The landscape is filled with hills, rocks and dense forests. The sky is purple and pink. It is not known if there are seasonal changes.

The Battle Nexus was governed by a mystical figure known only as the Daimyo, who presided over the matches of the tournament and maintained the peace of his realm using the War Staff of Ultimate Power. Though the Daimyo had final say over who could compete in the tournament (and, more generally, on any other rulings) however, the individual matches were usually refereed by his servant, an ethereal being named Gyoji.

The Battle Nexus was capable of supporting lifeforms from various atmospheric conditions, including Traximus, a member of the nitrogen and sulfur-breathing Triceraton race, who was able to move about and fight comfortably without the aid of a breathing apparatus.

The Tournament takes place every three years. After registration, each participant must take part in the qualifying round. Only the Daimyo under its decree may allow unregistered persons to take part in the tournament. Although the Daimyo has the decisive voice in all matters of the Tournament, the duels are mainly presided over by the Gyoji (he watches rules and fair fights). One lost match ends the adventure of the loser in the tournament. Two fighters who have not lost any duel face each other in the final round, which is to determine the winner. If someone gets a serious injury during the tournament, the fight is interrupted for a while and the wounded person may give up. If he does not do it, he has to keep fighting with the injury.

Climatically and geologically, the Battle Nexus is an image of medieval Japan. The exact spread of the nexus is unknown; the known areas are covered with hills, rocky cliffs and dense forests. The sky is purple and a bit dim compared to the Earth. Whether there are seasonal changes is not known.

The only major trace of civilized influence can be found in the palace of the Ultimate Daimyo, the ruler of the Nexus, who sits on a rocky cliff with a waterfall, and the Battle Arena, where the Battle Nexus tournament takes place every three years. The arena is surrounded by a small place, which is mainly for the accommodation and tasting of tournament competitors and any guests. The climate works universally through magical powers, so that even species that could not survive under Earth-like conditions - like the Triceratons who need a mixture of nitrogen and sulfur - can move freely here without a breathing apparatus. The natives of the Nexus live as in medieval Japan, but also wear masks (male) or face painting (female), which are based on the earthly Japanese kabuki tradition.

The Battle Nexus is entered primarily through a ritual in which various mystical symbols are drawn in a circle on a vertical surface and a meditative chant is sung. This will open a gate instead of the symbols, through which you simply have to step through to get into the nexus. This ritual is mainly taught only to tournament participants, although other persons (like the turtles) can also learn and/or apply it through observation and imitation.

An anti-fatality barrier is in place for the matches. When a deciding blow would be about to be struck, the loser is teleported out of the arena before they can be seriously wounded. Those wishing to participate in the Battle Nexus must first complete at least one qualifying match: only the top 32 enter the tournament proper in the arena. A series of one-on-one elimination matches, called tiers, are held. For tier one, metal dividers rise up between the contestants, splitting them up into groups of two depending on who they are next to. Only the sixteen winners move on. Tier two begins immediately once the first tier ends. The remaining sixteen are encompassed in a teleportation field and randomly matched with each other. A megaquargon-long break is held between the second and third tier (the exact length in Earth terms is never stated). The third tier match-ups are determined from random lottery - each contestant blindly draws a kunai and the two with the same colored ribbon are paired up. For the forth tier, the remaining four contestants step through the portal and randomly paired up. Notably, the two fighting pairs are not separated by a physical divider. The pairs are not allowed to interfere with each other but some interference may occur by accident. The winners are teleported to a special arena for the final match. The last one standing wins the tournament.

How exactly the Battle Nexus was developed, is not known. It is likely that the Ultimate Daimyo, with the help of the Mystic War Staff, was the first to open a gate to the Nexus and enter it. He opened this place for himself and the ambition of his life: To create a fighting arena in which the most diverse participants from all possible worlds should compete against each other for the honor of the competition. 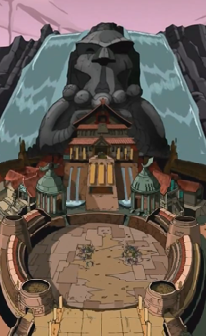 The Ninja Turtles entered the Battle Nexus Tournament having followed Splinter through an interdimensional gateway. Once there, they learned that Splinter was in fact the previous champion of the competition, as had his own master Hamato Yoshi before him. While competing, the Turtles had to unfoil a plot conceived by the Ultimate Ninja - the son of the Daimyo - and Splinter's old rival, the evil dragon named Drako. The two had attempted to steal the Daimyo's staff and using it to rule the galaxies. Eventually, however, they were defeated. (The Big Brawl)

Later, Leonardo and Miyamoto Usagi return to the Battle Nexus after the fused "Ultimate Drako" scatters the Turtles across time and space. There, they must fight the two villains once again, but thanks to the Time Scepter of Lord Simultaneous, they prevailed. (The Real World, Part 2)

All tournament champions have a statue of themselves erected in the Pavilion of Past Champions.

Participants in the Latest Tournament (In order of elimination):

Note: This is the tournament shown in "The Big Brawl".

The Battle Nexus has been hinted at existing in the Mirage comic book version in issue 24 of Volume 4. In issues 25 and 26, Leonardo travels to it. He has yet to learn what the place is except that Splinter has fought there. The Battle Nexus was introduced in Mirage's fourth volume. Leonardo traveled there via instructions in a book of Splinter's. There, he encountered several characters, including Gyoji and Oroku Yoshi, a good version of The Shredder. Of the characters known from the 2003 series, only the Gyoji has been revealed so far and after his death Splinter becomes a resident of the nexus. More details about this version of the Battle Nexus are not known.

The Battle Nexus (which initially bears no name) also appears in the IDW continuity and, just like in the 2003 series, is the venue of the Battle Nexus tournament. Here, however, the Battle Nexus itself is not a dimension, but an asteroid (similar to a Triceraton ship), on the surface of which lie the city and the battle arena. The Nexus is governed by a five-member council, the so-called Dimensional Council, which also includes Lord Simultaneous.

The Battle Nexus was formed as a peaceful solution to the bloody tournament previously held as seen in the end of Teenage Mutant Ninja Turtles 2014 Annual.

At the first appearance of the Nexus, these games were implemented by Nieli, the leader of the Dimensional Council, as uncompromising gladiatorial combat. Only the efforts of the Turtles, Renet and the warrior Baltizar put an end to these cruel games and lead to the banishment of Nieli.

Rise of the TMNT

In the 2018 cartoon series, the jorōgumo Big Mama runs a tournament she calls the Battle Nexus, but it is presently unknown if this is supposed to be the same Battle Nexus from previous installments, or just something she named that.

Retrieved from "https://turtlepedia.fandom.com/wiki/Battle_Nexus?oldid=524282"
Community content is available under CC-BY-SA unless otherwise noted.