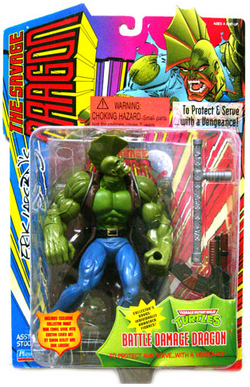 Protect and serve... with a vengeance!

With gangland violence reaching a new pinnacle, the Chicago P.D. has turned time and time again to one of its unique officers – The Savage Dragon. Fighting fire with fire, the Savage Dragon, himself a fearsome freak, aids the department’s efforts to sweep the streets clean of lawbreaking freaks from the criminal cabal known as the Vicious Circle. The Savage Dragon has valiantly dared to confront them and vowed to end their onslaught against decency. With his department sanctioned street assault gear and his allies Barbaric and She-Dragon, the Savage Dragon and his team stand ready for police action at all times. Also on call for active duty are the Teenage Mutant Ninja Turtles, perfect for special late night assignments. Citizens have been warned of the highly dangerous criminal freak-attacks in the alleys and streets. Dragon’s injured, battle-damaged bod clearly shows the degree of danger lurking in the city. Luckily he’s never out of commission for too long. He’s a quick healer and always back on the beat in no time. Keeping the streets safe for the law-abiding citizens of Chicago and eliminating the criminal element: those are the goals of the Savage Dragon.

Retrieved from "https://turtlepedia.fandom.com/wiki/Battle_Damage_Dragon_(1995_action_figure)?oldid=481538"
Community content is available under CC-BY-SA unless otherwise noted.