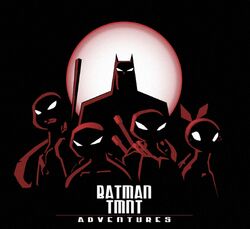 Batman/TMNT Adventures is a crossover comic between the DC Animated Universe version of Batman and the Amazing Adventures TMNT, that debut on November 2016 to May 2017. The series was be written by Matthew K. Manning, drawn by Jon Sommariva and colored by Leonardo Ito.

Retrieved from "https://turtlepedia.fandom.com/wiki/Batman/Teenage_Mutant_Ninja_Turtles_Adventures?oldid=534554"
Community content is available under CC-BY-SA unless otherwise noted.