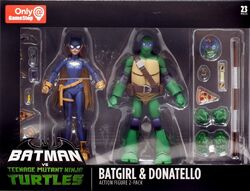 Batgirl & Donatello is an action figure set from DC Collectibles, released on October 7, 2019 as a GameStop exclusive, although a shortage of stock kept the figures ordered online from shipping out until the week of October 21.

Smart and strong! Batgirl and Donatello make the perfect pair in this action figure 2-pack. Accessories for these figures include extra sets of hands, a bō staff, pizza slices, a cell phone, a T-Phone, a Batarang, a grapnel gun, retromutagen ooze darts and a glow-in-the-dark mutagen can. Donatello also comes with an additional head.

Add a photo to this gallery
Retrieved from "https://turtlepedia.fandom.com/wiki/Batgirl_%26_Donatello_(2019_action_figure_set)?oldid=520109"
Community content is available under CC-BY-SA unless otherwise noted.