Start a Wiki
Barney Stockman is the red-haired twin brother of Baxter Stockman in the 1987 TV series, he also is a mad scientist, and he threw fits whenever someone confused him with Baxter. He claims to be the good-looking one. He somehow knew his brother got turned into a fly, but is a bit inaccurate on the details (he believes Baxter turned himself into a fly by accident, when it was actually because Krang attempted to disintegrate him, but he got mixed up with a fly).

His only appearance is in "Raphael Knocks 'Em Dead", which in the beginning while the Turtles were channel-surfing, Barney was seen mixing chemicals, suggesting he has had his own science show.

In the episode, he is used by Pinky McFingers and his gang to kidnap comedians and use a machine to enhance the hilarity of their jokes. Barney and Pinky McFingers kidnap Raphael and use him to spread chaos across the city with his jokes, until the Turtles rescue Raphael. In the end, Barney was arrested and sent to jail. 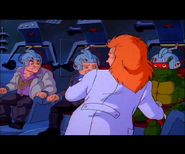 Add a photo to this gallery
Retrieved from "https://turtlepedia.fandom.com/wiki/Barney_Stockman?oldid=487102"
Community content is available under CC-BY-SA unless otherwise noted.