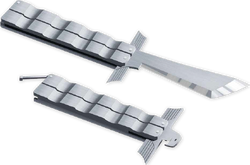 A balisong, or butterfly knife, is a folding pocket knife with two handles which counter-rotate around the tang so that, when it is closed, the blade is concealed within grooves in the handles. They typically are made with a latch on the handle facing the cutting edge that is called the Bite Handle. The balisong originated from the Philippines where it has traditionally been used as a portable utility knife.

The balisong is the primary weapon of Xever Montes (aka Fishface) as seen in the 2012 TV series.

The knife is illegal or restricted in some countries, often under the same laws and for the same reasons that {switchblades or other concealed weapon}s are restricted.

Retrieved from "https://turtlepedia.fandom.com/wiki/Balisong?oldid=516870"
Community content is available under CC-BY-SA unless otherwise noted.