Leo, Raph, and Mikey take cover in the undergrowth and watch the battle on Burnow Island unfold. Not seeing the Fugitoid anywhere, the Turtles decide they have to press on without him.

Amidst the fighting, Krang and Shredder duke it out with one another while Captain Tragg and Sergeant Granitor fight Koya and Bludgeon. Shredder continues dancing away from Krang's strikes. The Foot Clan Elite Guard, seeing their master in danger, rush to help but Krang stops them. Shredder manages to land a decent blow on Krang, but afterwards is knocked aside forcefully. Shredder lays on the ground, surprised by the turn of events, and Krang tells him he was betrayed.

Inside the command center, Stockman and Honeycutt sit inside their cell wondering if Krang and Shredder have defeated each other yet. Stockman seems unconcerned and Honeycutt asks him why. Stockman explains that he had also come up with a plan, and unlike Honeycutt's his is still proceeding as intended. Stockman explains that during the building and programming process, he used one of his flyborgs to access the Technodrome's schematics and secretly install malware in its mainframe. Once the Technodrome is activated, the malware will initiate and give control of the core overrides to Stockman. Honeycutt points out that in this plan, thousands of innocent people will perish in the minute it takes the malware to transfer control. Stockman accepts this as a necessary evil. Honeycutt disagrees, and uses his robotic form's ability to transform to change into his Chet Allen disguise and trick the guards into letting him out. Stockman realizes that Professor Honeycutt had been working for him at StockGen all along. As Honeycutt and the guards are distracted, Stockman uses his watch to summon a wave of M.O.U.S.E.R.s, which pour out of a ventilation shaft and incapacitate Honeycutt and the guards with electricity.

At Foot Clan headquarters, Hun resents having to sit around and wait while Shredder and the others attack Burnow Island. Karai enjoys a cup of tea and tells him that Shredder's orders were very clear and that should be enough. Just then an explosion blows a hole in the wall, sending the two flying. Hob, Splinter, Herman, Mondo Gecko, and Slash enter armed to the teeth and begin their attack. Hun calls out Slash for sucker-punching him during their last meeting (see City Fall Part Seven, issue #28). Slash counters that Hun must have forgotten his previous punishment and slams him clear through a wall. Back inside, Mondo tries to take out Karai but is unsuccessful. Karai is about to bring her sword down on him when Splinter intervenes. Karai asks if Splinter's sons were too coward to join them in the attack, but Splinter tells her she is very wrong, as his sons are currently working to end the threat posed by the madman that is her grandfather. Splinter tells Karai that Shredder's fate is sealed and deserved, but he does not think the same is true for her.

Seeing that everything is taken care of at least for the moment, Hob slinks away from the battle. Hob takes out the guards and raids the Foot's storeroom, stealing their supply of mutagen. Having gotten what he came for, Hob orders the Mutanimals to fall back. Slash voices concern about leaving Splinter, but Hob tells him that if Splinter can change the game plan, then they should be able to do the same.

Inside Krang's base on Burnow Island, Leo, Raph, and Mikey try to find the Technodrome control center. Mikey wonders if they should have waited a little longer for the Fugitoid. Raph tells him to quit whining just as two of Krang's guards find them and open fire. Fortunately Mikey is able to knock them out quickly. Unfortunately, Stockman then finds them as well and orders his flyborgs to attack them.

Outside, Shredder struggles to stay on his feet as he takes a savage beating from Krang. Krang is nearly finished with Shredder when he is alerted by the command center that Stockman is trying to seize control of the Technodrome. Krang leaves Tragg and Granitor to take care of Shredder and his remaining forces.

Inside, the three Turtles attempt to fight past the flyborgs. Stockman mans the Technodrome controls and initiates the activation sequence so that his malware can begin. Before the activation is complete, Krang arrives and knocks out Stockman. Krang, already prepared for the possibility that Stockman would try something, orders the triggering sequence to be rerouted through redundant arrays to bypass Stocman's malware. The Technodrome is activated.

Koya and Bludgeon stand guard over the defeated Shredder, pledging to give their lives to protect him. Shredder tells them that they will not be the only ones to die.

Back at Harold's lab, Donnie looks on nervously as Bebop and Rocksteady receive the order to kill him.

Cover A by Cory Smith.

Cover RI by Aaron Conley.
Add a photo to this gallery 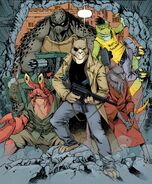 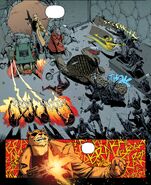 Retrieved from "https://turtlepedia.fandom.com/wiki/Attack_on_Technodrome,_part_3?oldid=429338"
Community content is available under CC-BY-SA unless otherwise noted.