Part 2 of "Attack on Technodrome!" An unusual alliance makes its first moves as Fugitoid, Baxter, and Krang aim to outwit each other. The twists and turns are just beginning as the Technodrome is mere moments away from activation!

The Mutanimals and the Turtles are loading equipment and weapons onto a pickup truck, when Leonardo informs Old Hob that he and his two brothers won't be coming on the mission to attack the Shredder. Old Hob is unsurprisingly upset by this news, but Splinter assures him that he will be coming on the mission even if his sons aren't. He steps aside to speak with them.

Michelangelo is frightened by the possible dangers ahead, and Splinter reassures him that his brother's plan is both brilliant and noble. As the Turtles depart, Old Hob complains that the mission will be much harder without their help, but Splinter announces that they will be helping them from elsewhere.

On Burnow Island, the Fugitoid blurts out that the Shredder and the Foot will be attacking that very day. Krang is enraged by this news and demands to know how he knows this, but Honeycutt refuses to say who his spy is. Stockman manages to calm the angry Utrom down and keep him from killing the Fugitoid... but then betrays him by revealing that the news of the Shredder is only half the story. In exchange for the news of the Turtles, he wants a non-terraformed place on New Utrominon left as a sanctuary for himself. Krang orders them both imprisoned.

Leonardo, Raphael and Michelangelo arrive at the lab where Donatello and the teleporter are waiting for them. Donatello sadly reveals to Leonardo that he isn't coming on the mission with them, because he says someone needs to handle technical stuff at that end. He activates the teleporter, the brothers express their love for each other, and the three leave Donatello behind.

Once the other Turtles have left, the Shredder arrives with his four mutants and a large number of Foot Ninja. the Shredder mentions that as per their agreement, he is leaving Rocksteady and Bebop behind with Donatello to ensure that he won't betray them.

Professor Patrick Miller sneaks into a darkened room, and is shocked to see April waiting there. He reluctantly admits that trying to preserve the Ashi no Himitsu at all costs was the wrong thing to do, and that he owes them.

The Mutanimals and Splinter are lurking outside a Foot installation, and Splinter thinks back to a family meeting they had earlier. Leonardo revealed to him that they were not accompanying him to fight the Foot, because he had an idea to take down both the Technodrome and the Shredder. He secretly conspired with Donatello to convince the Shredder that one of them was secretly helping him, pitting the Shredder and Krang against one another in the hopes that they will obliterate each other, and attacking the Technodrome when they're distracted.

Splinter was shocked by the news that his sons had been crafting this plan behind his back, and the three Turtles say that his obsessive focus on killing Saki made it unwise to consult him. Splinter confesses that his single-mindedness has caused him to lose his way, and congratulates Leonardo on his plan.

On Burnow Island, the Shredder is just about to attack when one of his Elite is shot in the face. Krang and his soldiers have arrived, and the two armies immediately launch into bloody combat. Krang attempts to leave the battlefield with Tragg and Granitor, but are blocked by Shredder, Koya and Bludgeon.

Cover A by Cory Smith.

Cover RI by Brian Churilla.
Add a photo to this gallery 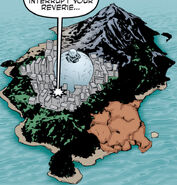 Retrieved from "https://turtlepedia.fandom.com/wiki/Attack_on_Technodrome,_part_2?oldid=429324"
Community content is available under CC-BY-SA unless otherwise noted.