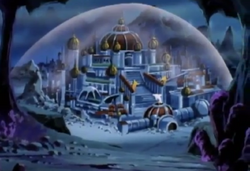 Atlantis appeared for the first time in the 1987 TV series episode, "Atlantis Awakes".

The city is powered by the Star of Atlantis, a giant crystal.

Retrieved from "https://turtlepedia.fandom.com/wiki/Atlantis?oldid=521807"
Community content is available under CC-BY-SA unless otherwise noted.