Start a Wiki
Astro Zombies, also called Space Zombies are a plague that has been eradicated in the universe for 12,000 years.

In the 2012 TV series episode The Weird World of Wyrm, The Ninja Turtles, April O'Neil, and Casey Jones get involved with astro-zombies as they explore the wreck of a space ship. The Astro Zombies were brought back by Wyrm as Casey accidentally wished something exciting would happen during their mission to find survivors in a ship. Fugitoid stated that there hasn't been an astro zombie outbreak in 12,000 years. 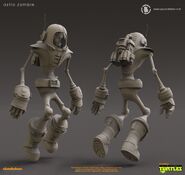 Add a photo to this gallery
Retrieved from "https://turtlepedia.fandom.com/wiki/Astro_Zombie?oldid=516968"
Community content is available under CC-BY-SA unless otherwise noted.