In the Mirage continuity, a robot version of April O'Neil was constructed by Donatello, based on the responder robot technology he had been developing since the Turtles were still young and living in their first sewer lair. In the future, an older Raphael lives alone on the rooftop of an abandoned urban building with a few possessions retained from the past, including his teddy bear and the April robot. But nothing lasts forever—the teddy bear has lost one of its button eyes, and the April robot is malfunctioning and Raph is unable to repair her himself.

The April robot appears in Tales of the TMNT volume 2 issue #55: Day in the Life. 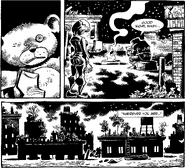 Add a photo to this gallery
Retrieved from "https://turtlepedia.fandom.com/wiki/April_O%27Neil_(robot)_(Mirage)?oldid=499080"
Community content is available under CC-BY-SA unless otherwise noted.