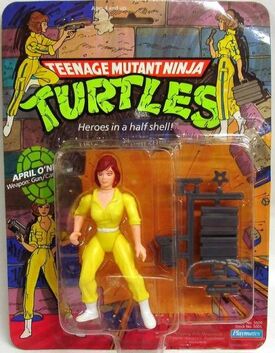 
April's a determined TV news journalist, always prepared for the late breaking news feature with her camcorder strapped 'round her arm. Her eagerness, however, gets her into trouble and makes her a big pain in the shell for the Turtles, who always end up saving the damsel in distress.

Still, April's no air head and is a valuable member of the Turtle Team. Being a pretty human has its advantages, like getting into places the Turtles can't. When the situation calls for more than a news flash, April's ready with a trusty gun, which is secretly locked in her camcorder.

April O'Neil was originally released without blue stripes on her pant legs and sleeves. A running change quickly corrected this error and the blue stripes were added. 'No stripe' Aprils have since become sought after collector's items and mint on card examples have been known to fetch hundreds on the secondary market.

Unlike most figures released during the first year April O'Neil was never issued with a soft rubbery head.

In 1991 the first April variant was released replacing this figure with that of a animation accurate head, orange boots and trim. 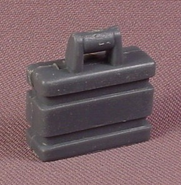 1990 UK carded figure
Add a photo to this gallery