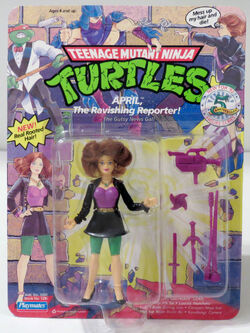 Flash! This just in: April is the world’s most ravishing reporter. What does that mean? That means you’re dealing with the gutsiest glamour gal to ever say, “We’ll be back after these messages.” April’s one cool chick. She’s got the power of the bob ‘n wave – thanks to her real rooted hair. And what she lacks in brawn, she makes up in brains. This smart sister is super chic and turns heads wherever she goes. She never has a bad hair day when she’s armed with her katana blade curling iron. It’s bad news though if this ravishing reporter hears a whistle in the wind from a flirtatious Foot fiend. She’s got a detachable skirt that lets her kick low and high. And no kiss is as deadly as when April aims her lipstick nunchaku at a Foot face. Why would a bodacious bylinin’ babe like this be interested in a Mutant Turtle? Well, as one source reported, “Cuz they’re just so cute!”

Retrieved from "https://turtlepedia.fandom.com/wiki/April,_the_Ravishing_Reporter_(1992_action_figure)?oldid=397864"
Community content is available under CC-BY-SA unless otherwise noted.