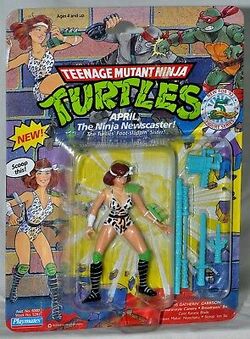 April O’Neil’s here to bring you all the news that hurts. She’s 105 lbs. of pure ninja. And that means the Foot will never make headlines as long as April, the Ninja Newscaster, files her reports. Sided with the Turtles, this seasoned Foot-fightin’ sister has the power of the press on her side – and this time, it kicks, chops and punches. Using her samurai-style camera and broadcastin’ bo, April’s always sure to get an interview with the Foot Clan – even if it hurts them. She’s hot, heroic and headstrong. She’s ready for rad reptile reportin’ with her newsmakin’ nunchaku and scoop ‘em sai. So stand back and watch April prove she’s the one and only ninja newscaster – the world’s first judo, ju jitsu jammin’ journalist!

Retrieved from "https://turtlepedia.fandom.com/wiki/April,_the_Ninja_Newscaster_(1992_action_figure)?oldid=386816"
Community content is available under CC-BY-SA unless otherwise noted.