"April's Artifact" is the forty-seventh episode of the animated series Teenage Mutant Ninja Turtles, which originally aired on May 1, 2004. It had 1.98 million views on the 4kids website as of 2007.

April: What, you may ask yourself, is a mild mannered antique shop proprietor doing dressed like a finalist in the Miss Primitive Universe Pageant . As you may have guessed, this isn't exactly downtown New York City, or downtown Earth, or even downtown our dimension. How did we get here? Long story. How do we get home? Well, hopefully, the answer is inside this temple. Unfortunately, the way home isn't the only thing inside this temple.

Open with the Turtles, April, and Casey setting up things in April’s antique shop. The TMNT nearly caused a lot of damage with their weapons despite their good intentions, which leads April to take their weapons away. Raph finds an old puzzle box that was previously owned by April’s Uncle Augie who mysteriously disappeared years back. As O'Neil examines her uncle’s trinket, it suddenly transports her and the Turtles into another dimension, leaving their weapons and Casey behind!

Our heroes are pulled through dimensions and fall from the sky in a mysterious jungle. As the group collects themselves, a giant flying insect resembling a cross between a praying-mantis and a hornet flies in and scoops up Raph and Don. With Raph and Don being carried off, the others begin to give chase. From the air, Donatello spots a tree house. Don points out the bug's weak spot and instructs Raphael to swing him up so he can attack the creature. Raph complies and Donatello delivers a powerful kick to the giant hornet's abdomen, forcing it to let the ninjas go. Raphael and Don fall through the thick foliage, which breaks their fall to some extent. Don lands heavily just as Leo, Mike and April arrive - Raph is temporarily stuck in a tree until Leo gets him down.

Since the jungle is filled with peril, our heroes make makeshift weaponry out of rocks, sticks, and other jungle implements. Once armed, the team creates sailboards so they can travel down river more swiftly. Everyone is amazed at how naturally April has taken to the wilds and she earns the nickname "Jungle Girl". The group arrives at the base of the tree house and climb a long ladder to investigate. Inside they realize that the puzzle box must have transported April’s Uncle Augie as well, as they find a compass pendant and journal belonging to him. While the team examines things, a group of giant hornets attacks the tree house and fire their stingers into the structure. Raph gets hit in the leg by one and instantly becomes paralyzed!

The hornets continue to assault our heroes inside the tree house, while other bugs outside destroy some boards that cause the building to tilt and collapse. As the group escapes, they manage to grab Uncle Augie’s pendant and journal and the still paralyzed Raph. The team manages to defeat the attacking hornets on their way to the ground. Later that night, the Turtles and April are seated around a campfire. Raph recovers from his paralysis while April finds a map to an ancient temple in her uncle’s journal.

O'Neil reads from the journal and we see a flashback sequence as Augie finds a giant version of the puzzle box in the temple. The rest of the journal is filled with August's calculations on how to operate the giant puzzle box in effort to return back home.The next morning our heroes hike to the temple - where they discover that the giant hornets have built their nest around the temple. Don dives into the river and covers himself in stinky muck, explaining that the bugs have a heightened sense of smell, so they'll have to disguise their scent if they want to get inside the building. April and others dive in and cover themselves in mud to camouflage themselves from insects nesting outside the temple. The group sneaks into the structure undetected.Inside the temple, our heroes find hundreds of cocoons filled with giant hornet pupae that are about to hatch. Mike nervously spins his makeshift nunchaku, sending the stone from its end flying into one of the pods - thus waking the hornet inside. In seconds, hundreds of the pupae begin to emerge from their cocoons and attack!

As a futile battle begins, April spots a circular stone door that leads into a central chamber. The team makes it inside the chamber and shuts the door on the attacking bugs.Inside the room, the Turtles and April find the giant puzzle box and more of Augie’s notes. April thinks that her uncle must have used the puzzle box to return home, but Don studies the paper and notes that the settings on the mechanism are wrong (and thus couldn’t have taken him back home). They wonder what could have went wrong when the monstrous queen hornet attacks! As April and Don work the box using Augie’s notes, the other three fight off the queen. In the battle, Mike then Leo and then Raph all get paralyzed! April leaves Don and faces off with the giant bug. O'Neil bravely tosses her spear through the creatures neck! Don finishes rotating the puzzle to the right coordinates, and he and April drag Leo, Mike and Raph towards the device as it begins to surge with energy. Unfortunately the queen wasn't killed and she swoops in to attack, but at the last second our heroes are teleported out. Cut to the antique shop where the group is transported back. Casey walks in and is appalled by the stench of his comrades. April and the Turtles wash up and tell their adventure to Jones. April is wearing her uncle's pendant, and vows to find him some day. 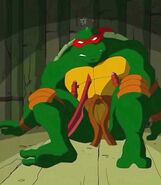 Retrieved from "https://turtlepedia.fandom.com/wiki/April%27s_Artifact?oldid=522279"
Community content is available under CC-BY-SA unless otherwise noted.