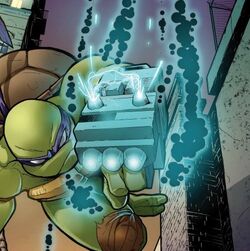 The Anti-Gravity Gauntlet was invented by Harold Lilja and first appeared in Teenage Mutant Ninja Turtles Micro-Series issue 3, where Lilja demonstrated its abilities at the New World Expo. Donatello later gave him advice on how to improve the device, including adding external power sources rather than letting it draw energy from its user.

An updated version was lent to Donatello during the City Fall arc, which he used during his family's final attempt to reclaim the brainwashed Leonardo. He used it effectively to levitate a car through a wall and to knock back his opponents (including Shredder and Leonardo). A variation was used by April O'Neil against Bebop and Rocksteady.

An antigravity gauntlet was later attached to the right arm of Metalhead as well as to Nobody's exo-suit.

Though Lilja later broke ties with the Turtles, Donatello retained at least one gauntlet, which he used to bring down a Dark Water helicopter. 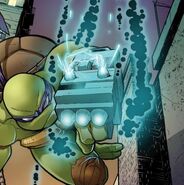 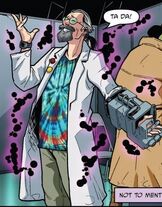 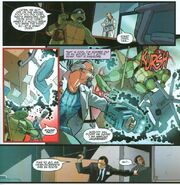 Add a photo to this gallery
Retrieved from "https://turtlepedia.fandom.com/wiki/Anti-Gravity_Gauntlet?oldid=406342"
Community content is available under CC-BY-SA unless otherwise noted.