Ananda is a superhero, member of the Justice Force, a friend of the Turtles, and the daughter of Battling Bernice and (in the 2003 TV series and its follow-ups), Dr. Dome.

The history of the old Justice Force in the 2003 animated series follows the Mirage template, but with some changes. This version is the daughter of Bernice and Dome (with which Bernice had probably taken a moment to get over her desire for Steve). Bernice retired for one year from the team in order to give birth to Ananda, but kept her existence secret from the others. Finally she returned to the team, but during her last deployment she was killed.

In the episode Return of the Justice Force, Ananda attempted to get revenge on the Justice Force because she blamed them for her mother's death in action, since she assumed that the Justice Force had forced Bernice to join the team again. She took over her father's Domeoids and used them to capture the old Justice Force one by one, forcing them into stasis and turning Steve and Dome against each other. When her father came barging in on the Justice Force, believing Stainless Steel Steve was responsible, Ananda presumed that JF would destroy each other. The Turtles and Casey had joined Steve in search of his friends. Mikey reminded Steve and Dome of their friendship, forcing Ananda to reveal herself and use the Domeoids instead. Mikey was able to come up with a strategy to dissipate her control by engaging the Domeoids in multiple locations at once, causing her concentration to falter, which resulted in her father's Domebot falling down on her and pinning her to the ground. Her father helped her up and told her that her mother came back to the Justice Force of her own free will to protect others. Finally coming back to her senses, Ananda took up her father's and mother's mantle and subsequently joined the new incarnation of the Justice Force under the leadership of Silver Sentry.

Ananda participated in the battle against the Triceratons' invasion of Earth, but was forced to break off the attack and return to Earth with Metal Head, who had been injured in the fight.

Ananda aided the Turtles in helping to subdue the resurrected Nano, whose core programming had been inadvertently scrambled by Baxter Stockman and who was therefore driven to attack the Justice Force. With the help of her technopathy, she was able to analyze his problem and introduced him along with Michelangelo and Leonardo into the Justice Force. Later on, Ananda and the rest of the Justice Force were part of the Turtles' strike force against the Tengu Shredder.

Ananda appeared in the episode The Journal, where she and the rest of the Justice Force were allegedly turned into babies by Michelangelo. Luckily, the story proved to be just a fabrication.

She shows up in the episodes Super Power Struggle and Wedding Bells and Bytes. Ananda and the rest of the Justice Force were invited guests for Casey and April's wedding. While coming late to the ceremony itself, they were just in time to save the attendants from an attack by the Cyber Shredder and the Foot Clan.

Ananda has inherited her father's technopathy skills, enabling her to control his Domeoids as well as communicate with other sentient machines. She can communicate by using her mind power with electronic machines or remote control directly. She enters a mission riding inside a huge, modified Domebot equipped with flight rockets in the legs, blasters hidden in the arms, and two pop-out blasters mounted in the unit's back/shoulder sections. The Domebot can also transport a number of Domeoids for additional assistance in numbers. 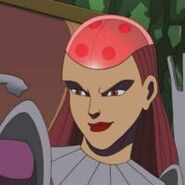