Alopex has followed four Foot Clan ninja who are trying to sell clan secrets to a high-powered businessman and wannabe ninja. She takes out the man's two security guards and then the man himself. The four Foot ninja stand on guard. She tells them to hold up. She says they all know she's going to win, so to make it an actual challenge, she agrees to fight blindfolded if they each agree to fight with four weapons which happen to be the same as the Turtles' weapons (she apologizes to whoever gets the bō staff). Alopex tells them they deserve their fate, since they betrayed Master Shredder after he took them in to his clan. She takes them out one by one. The last one begs for his life, telling her she can keep the money if she just lets him go. She says there is no escape from the Foot and she kills him.

After burning down the building to destroy the evidence, Alopex returns to the Foot's headquarters. She passes Bebop and Rocksteady in the hallway. Master Shredder is waiting for her. He tells her that the conflict with their enemies is escalating and they need to consolidate their resources. In the morning she will accompany him to clean up one of their old research facilities in Fairbanks, Alaska. She knows it well; it's the place she was mutated, it's the area where she lived in her former life.

Upon arriving in Fairbanks, Alopex asks to be allowed to take care of the job on her own. She searches through the research facility, searching for any useful supplies and planting bombs to destroy it. After going through the entire place, she sees a rabbit outside and the sight of it brings her back to her old life. She remembers living with her pack and helping provide food for them. She tries to fight the memories back but they keep coming. She remembers the polar bear that kept all of the other animals in the area in fear, forced to hide in order to survive. Suddenly she sees a normal arctic fox run past. She smells something burning. She runs towards the source of the smell and arrives to see Shredder and Foot ninja burning down the woods. Shredder tells her that this is her final initiation and she is now a chūnin within the clan. He tells her it is time to let go of her past so that she may embrace her future; Shredder tells her he is proud of her. At that moment Alopex snaps and attacks him. He orders the other Foot ninja to stand down so that the two of them may handle it on their own. Alopex manages to draw blood. She tells him that he already had her loyalty; that his was just a senseless act of violence. Shredder smiles. He tells her it was his idea to mutate a fox to use as a soldier. He beats her to the ground and tells her to remember her place: with the Foot Clan. She wants to fight him off, but she knows there is no escape from the Foot.

On the way back to New York City, Alopex comes to terms with what has happened. She vows to be Shredder's most valuable asset, to remain close by his side. In this new life of hers, he is the bear now, whom all live in fear of. But this time, she plans on killing the bear.

Cover B by Sophie Campbell.
Add a photo to this gallery 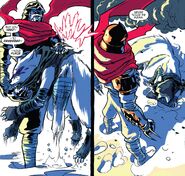 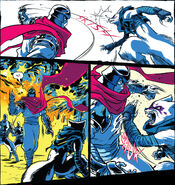 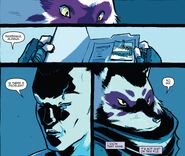 Retrieved from "https://turtlepedia.fandom.com/wiki/Alopex_(IDW_issue)?oldid=429732"
Community content is available under CC-BY-SA unless otherwise noted.