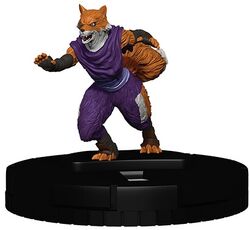 Alopex is a Heroclix figurine from the fourth set, Unplugged. It's supposed to be based on her 2012 animated series incarnation, but is just a redeco of her previous Heroclix release.

Retrieved from "https://turtlepedia.fandom.com/wiki/Alopex_(Heroclix_TMNT4-033)?oldid=511058"
Community content is available under CC-BY-SA unless otherwise noted.