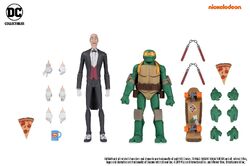 Alfred and Michelangelo is an action figure set from DC Collectibles, released on November 4th, 2019 as a Gamestop exclusive.

Retrieved from "https://turtlepedia.fandom.com/wiki/Alfred_%26_Michelangelo_(2019_action_figure_set)?oldid=510663"
Community content is available under CC-BY-SA unless otherwise noted.