Alex Winter, is an agent of an elite paramilitary force known as Dark Water.

Winter was first seen when spying on the Michelangelo and Raphael along Mondo Gecko from a distance. He is often seen reporting back to an unknown entity on his encounters with various mutants. While spying on Mikey when he was being accepted by the Mutanimals into their ranks, he asked if he should apprehend them now. Instead he was told to continue his investigation.

Despite working professionally with the E.P.F., Winter does not seem to have been pleased with the association, and appeared to sympathize more with the Mutanimals. In issue 70, Wesley Knight canceled Dark Water's service to Bishop. Winter immediately put a gun to Bishop's head, declaring that wars were common, but that family was "rare. Priceless."

With their contract terminated, Knight and Winter handed Bishop over to the mutants. Winter tossed Man Ray a loaded pistol to threaten Bishop with, before departing with the rest of Dark Water. 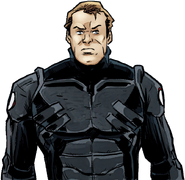 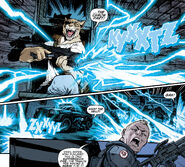 Add a photo to this gallery
Retrieved from "https://turtlepedia.fandom.com/wiki/Alex_Winter_(IDW)?oldid=467846"
Community content is available under CC-BY-SA unless otherwise noted.