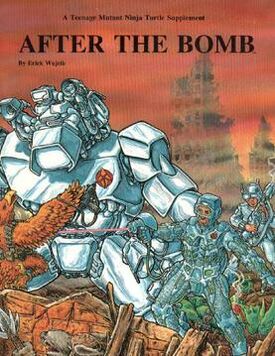 After the Bomb is a supplement to Teenage Mutant Ninja Turtles & Other Strangeness written by Erick Wujcik. It was later expanded into its own rulebook and setting after Palladium Books allowed the TMNT license to lapse.

In the near future, gene modifying technology has become widespread and inexpensive, allowing for consumer-level gene modifying kits. People began experimenting with transgenic hybrids, creating their own mutant animals. Creating human hybrids was technically illegal, but was impossible to enforce (since everyone has a full set of human genes).

Some kids decided to make a homebrew virus, based on the human genome, and release it into the wild. Roughly three-quarters of humanity died, and the virus also began to infect other animals, modifying their genetic code. The remaining governments decided this must have been an act of bio-terrorism, and waged nuclear war. Collectively, this fall of human civilization was known as "The Crash".

After a few generations, animals with human looks or other mutations became common, leading to the world of After the Bomb.

After the Bomb uses Palladium's Megaversal system, allowing characters to be ported into campaigns for other settings.

The creation of mutants is done using a point-based system, allowing users to spend from their pool of points, called BIO-E, to gain advantages, such as bipedalism, human looks, human hands, or speech. Points can also be used to gain psionic abilities, or to keep certain natural advantages of the animal, such as claws, tusks, horns, or enhanced vision. Vestigial disadvantages of an animal, such as color blindness or a restricted diet, can be taken to gain additional points. Lastly, points can be used to adjust the size of a character, allowing a rat to spend points to reach human size, or a rhino to gain points by reducing its size.

After the Bomb began as a supplement to Palladium's TMNT setting. However, due to lackluster sales and the choice not to renew their TMNT license, the second edition was released independently with expanded content, including character creation rules adapted from TMNT & Other Strangeness.

Retrieved from "https://turtlepedia.fandom.com/wiki/After_the_Bomb?oldid=497511"
Community content is available under CC-BY-SA unless otherwise noted.