Start a Wiki
Ace Duck was Baxter Stockman's 74th attempt to make a mutant army for the Shredder. According to Stockman, he flies, swims and knows Taekwondo (a triple threat), but Shredder considers him completely ridiculous and an absolute failure. He only appeared as a picture in the episode The Lonely Mutation of Baxter Stockman.

Ace Duck has a human body and a giant duck head, wears a black leather jacket and a black cap. As Baxter said, he can fly and his arms seem to be human. 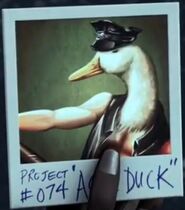 Add a photo to this gallery
Retrieved from "https://turtlepedia.fandom.com/wiki/Ace_Duck_(2012_TV_series)?oldid=429129"
Community content is available under CC-BY-SA unless otherwise noted.