Hungry for duck brain, Krang ordered Shredder to beam an Earthbound duck to Dimension X (there's a shortage of ducks in Dimension X). While transmuting the duck, famous test pilot, Ace Conrad, accidentally flew into the energy beam. The emerging plane was suddenly piloted by Ace Duck, the aero-dynamic adventurer with a big bill. The plane plummeted into the inner city and slid nose-first into the sewer. Ace escaped without ruffling his feathers and found himself at the secret hideout of the Turtles.

After realizing he wasn't just some quack off of the streets, the Turtles decided to hire Ace to pilot their Turtle Blimp. Always looking for a good adventure, Ace isn't afraid to scramble the Foot with his hard-boiled Egg Grenades... as long as he gets paid on time. Even though he's employed by the Turtles, Ace is still their fearless, flying friend. 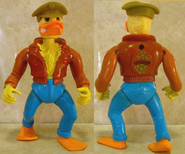