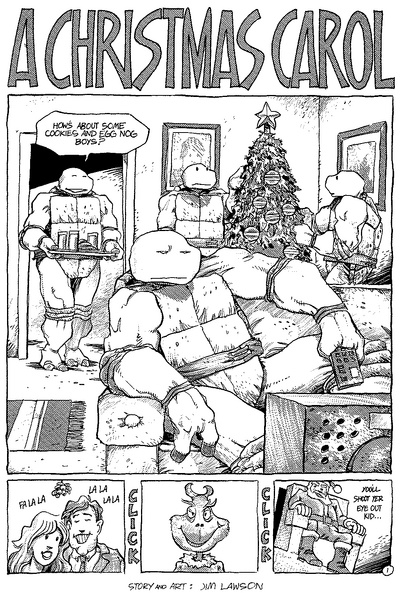 For the IDW continuity pastiche of Charles Dickens' A Christmas Carol, see Teenage Mutant Ninja Turtles issue 89 (IDW), which does not have its own title.

A Christmas Carol is a Mirage TMNT short story published on December 1990 in Michaelangelo Christmas Special by Mirage Studios, alongside a reprinting of the December 1985 comic The Christmas Aliens.

On Christmas Eve, a frustrated Raphael can't stand Christmas anymore and leaves his brothers at April's apartment. He runs across rooftops but accidentally falls and injures his leg. As he takes cover in an alley, he's visited by the Ghost of Christmas Past. He shows Raphael the last Christmas the turtles celebrated in the sewer, before meeting April. Raphael says that at the time, he didn't feel like joining his brothers in celebration. He's then shown the Christmas when the The Foot attacked April's apartment. Raphael then meets the Ghost of Christmas Present, who shows him his brothers sitting around and talking about they won't be going out after him, since it's his own choice if he wants to miss Christmas. Then the final Ghost shows up, guiding Raphael into a swamp, where he meets his future self: a apparently savage, one-eyed loner. Raphael can't understand how he could end up like that. He wakes up in the alley and races home to wish his brothers a merry Christmas.

Add a photo to this gallery
Retrieved from "https://turtlepedia.fandom.com/wiki/A_Christmas_Carol?oldid=508501"
Community content is available under CC-BY-SA unless otherwise noted.