The fate of the Earth hangs in the balance, and it's up to the turtles to save the world with help from their new ally, the Fugitoid. Ready to lead his brothers back in time to change history, Leonardo is fully equipped with an oxygen converter, an alien decryption translator, and pulse boots.

A version of this Leonardo figure was released as a San Diego Comic Con 2014 exclusive. Besides the packaging, the figure mold is identical, except for the chrome painting. It also comes with a manhole cover stand for the figure. 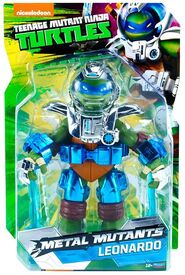 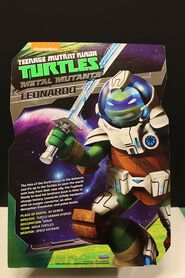 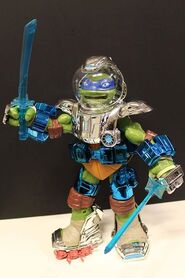 Add a photo to this gallery
Retrieved from "https://turtlepedia.fandom.com/wiki/11%27%27_Metal_Mutants_Leonardo_(2015_action_figure)?oldid=477850"
Community content is available under CC-BY-SA unless otherwise noted.